Remembering Margaret Mahy was the title of a symposium held on Saturday 22 September in Wellington, bringing together a collection of people - academics, writers, readers and fans - to talk about and celebrate Margaret's stories, poems, novels and film scripts. The event was organised by the English Department at Victoria University - in particular  by Kathryn Walls, and as she pointed out in her welcome, it was being held on what was indeed -

Tessa Duder's A writer's life has just been reissued with an updated biography and list of Margaret's books. Tessa set the scene with a summary of Margaret's life and achievements, from her early years as a writer when she was trying to combine motherhood with full-time work and would often stay up writing until nearly dawn. Later in the day she was sometimes known to fall asleep over her library filing cards, and thoughtful colleagues would quietly re-check her filing in the afternoon. Tessa went on to talk about the prolific writing years that followed, and the many prizes and awards she garnered, culminating in the prestigious Hans Christian Andersen Award (sometimes called "the little Nobel"), presented at Macau in 2006.

Kay Hancock, former editor at Learning Media, is currently undertaking a PhD on the history of the Ready to Read series (aimed at Year 1 - 3 students)  which began in 1963, and she gave a fascinating overview of Margaret Mahy's involvement in this series, with a glimpse of just some of the many titles she wrote. Dr Vivien Van Rij from the Dept of Education at VUW followed this with a talk on Margaret's work for the School Journal. As a contributor to both series, I loved these two talks and the way they highlighted Margaret's fabulous work in this area. Her Ready to Read books such as Fantail, fantail or The bubbling crocodile must have been a delight  for any child to read, with their mix of charm, humour, clever rhythm and rhyme, rich language, appealing characters and warm family situations. I especially liked the cheerful, impulsive Crocodile who made a complete mess of the kitchen but was was enchanted by the foamy soap bubbles: "The Crocodile is a great lover of beauty,"' wrote Margaret.

During the break, we had a charming interlude in which Dr Marco Sonzogni, Current Director of the New Zealand Centre for Literary Translation, invited the Swiss Ambassador, Marion Weichelt Krupski, to launch a  publication from Wai-te-ata Press. The booklet is an excerpt from Margaret Mahy's The three legged cat translated into te reo and also the four languages of Switzerland: French, German, Italian and Romansh. Interestingly, there was a question at the end of the day about whether any of Margaret's works had been translated into te reo, and it's possible that this is the first.

Dave Gibson, from Gibson Group, said that working with Margaret was one of the fondest memories of his professional life. He kept us entertained, enthralled and occasionally slightly spooked with film clips from Cuckoo Land, The haunting of Barney Palmer and the rather creepy Typhon's People. Loved the singing, dancing IRD men and the wonderful Library Recovery team. Couldn't bear to watch the deletion of Phoenix in the test tube - although it turned out to be not quite what we thought. .

Harry Ricketts then introduced two writers who each gave a personal perspective on what Margaret and her work had meant to them. Eirlys Hunter spoke as a parent who had read and reread Margaret's picture books to her four children, and James Norcliffe as a near neighbour who was the grateful recipient - as many other writers were - of Margaret's legendary kindness and generosity.

After lunch, we heard from a number of other speakers,  focusing on Margaret's writing process, and often on one or more of her YA novels : Dr Claudia Marquis and Dr Rose Lovell-Smith from Auckland University, Dr Anna Smith from the University of Canterbury, Dr Babette Putz and Professor Kathryn Walls from Victoria University, and Trish Brooking from Otago University. Finally Dr Anna Jackson introduced Elizabeth Knox, who ended the day in style with a fine address on The other side of silence.

It was great to have this day set aside to talk about Margaret herself, her vast body of work and her wonderful legacy; how much we have lost with her passing, but how much of her we still have left. Everyone in the room went away not only with a renewed appreciation for Margaret's achievements, but also with a determination to go back and re-read all those wonderful stories, to enjoy them all over again and re-discover their depth and meaning.

Posted by Philippa Werry at 10:00 No comments:

On display for just one month at Te Papa is Michael Parekowhai's amazing installation titled On first looking into Chapman's Homer.

It's hard to describe in a way that does it justice, but it is breath-taking. Here's an attempt: it's a genuine Steinway grand piano, astonishingly red and intricately carved all over including the lid, flanked by two bronze pianos on top of which  are two incredibly life-like and life-size bulls, one standing and pawing the ground, one sitting. 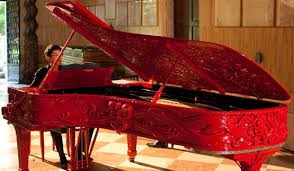 I'd read Mark Amery's review in the Dominion Post which really helped me relate to this work, especailly the references to the river and the landforms as viewed from the the water.

People can book a time to come and play the grand piano. When I was there, a man arrived, sat down and started to play Tom Lehrer's song "The elements", listing all the elements of the periodic table (at least as known in 1959, up to no 102), which made it seem even more surreal.

He also played another Tom Lehrer tune: 'Poisoning pigeons in the park'!

But there are also concerts on every day at 12.30 and it's on display until the 23rd - only a few more days now!

Posted by Philippa Werry at 01:44 No comments:

Writers' and Readers' Week at WEGC

Last week I was invited to come and talk at the Writers' and Readers' Week held by Wellington East Girls' College to celebrate the re-opening of their library space.

I say "library space" rather than "new library", because Wellington East Girls' College (WEGC) has had its share of difficulties lately since the main block was found to be substantially below current safety standards for earthquake risk. The library was of course in the main block which is now closed. It's a beautiful old building so we all hope it can be saved. At night when it's lit up, it sails like a ship over the heights of Mt Victoria. Both staff and students have had to be adaptable and resilient in dealing with a situation that has put stress on everyone. And the girls and teachers must be getting very fit when they often have to walk from the classrooms in the lower village all the way up to the new prefabs on the top field.

The library has had a whole year of homeless-ness, with the librarians using creative and innovative ways of bringing the mobile 'Library-2-U' but they now have an actual room, so the re-opening (to coincide with Readers' and Writers' Week) featured a week of events including a ribbon-cutting and opening ceremony, speeches and a book quiz. The girls were great to talk to and I really enjoyed my session.

One of the things I talked about (and read) was the story I submitted for the BNZ Young Writers' Award when I was in fifth form (now Year 11) at New Plymouth Girls' High School. It was Highly Commended and I told the girls that reading the judge's report, by Noel Hilliard, was the first time I had ever had any kind of contact with a real live writer.

The story is called Creation and you can find it on my website. I hadn't read it out loud before, because usually I talk to younger children at Writers in Schools visits to primary and intermediate schools. I thought afterwards that I should have warned them that they might be a bit confused for the first page or two (handwritten of course, no computers)  but that hopefully all would become clear, and I think it did.

I hope they're enjoying their new library space. And cheers to all school librarians who do such a great job (not always under such difficult circumstances.) 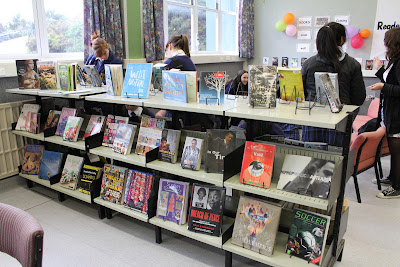