Anzac Day: the day after

I love the fact that people are continuing to find new and creative ways of marking Anzac Day and the days leading up to it.

Here in Wellington, instead of just handing over poppies on Poppy Day, a host of volunteers spent hours planting them on Midland Park so people could pick their own poppy in return for a donation. 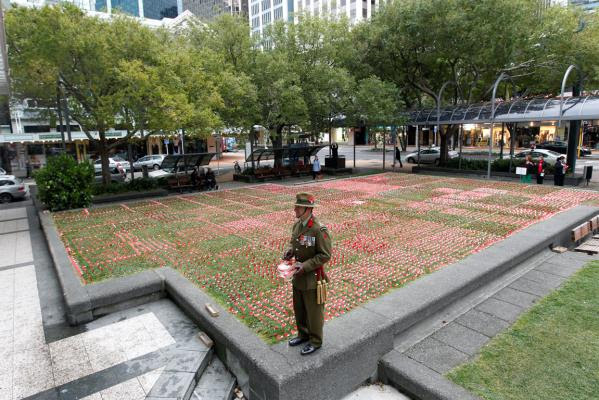 At the NZ Academy of Fine Arts on Queen's Wharf, Donna Sarten's installation Strange Fruit uses 3890 military dog tags suspended from the ceiling (each one stamped with the veteran's name and number) to show the number of New Zealanders who went to Vietnam.

I read about restaurants and movie theatres offering Anzac Day discounts to veterans, and Wellington even hosted a historic game of ARL football: St Kilda vs Sydney Swans (the first ever AFL clash played outside of Australia as part of the premiership season) which included the presentation of the Simpson-Henderson Trophy, honouring the stretcher-bearer heroes of Gallipoli.

In our family, we managed to attend Anzac Day services in three different countries. My sister and her husband got up at 3am to drive into central Sydney for the dawn service at 4.15am. I'm so proud of them (and also of my nephew who attended as well)- what a big effort to make!

One daughter is in New Caledonia on a school French trip, and the students were invited to join the Anzac Day service in Noumea - a very special occasion, as it was also being attended by 84 New Zealand WW2 veterans, there to mark the 70th anniversary of New Zealand's involvement in the Pacific war.

Meanwhile we went to our own local Anzac Day service, attended by adults, children and babies, Brownies, Guides and Scouts, St John's - and even a neighbourhood cat which wandered in and and seemed quite at home.

It has been a busy few weeks, with two book launches, several school visits and a number of interviews. But I am so grateful to everyone who has bought a copy of Anzac Day: the New Zealand story, for themselves or to give away. Thanks for helping put the book on the best seller list for the last 6 weeks (including one week at number one!) And thanks to everyone who has taken the trouble to tell me - in person or by email - that they've enjoyed it, or to share with me their own family stories of involvement in war.

Here are a few places you can go to see, hear or read more about the book:


(Thanks to Kathryn and the rest of the Nine to Noon team for making this live interview as stress-free as possible!)


Posted by Philippa Werry at 09:46 No comments:

Following the first launch in Wellington  we then held a second launch in Auckland, this time hosted by the National Library in Parnell. Christine Thomson and Amanda Robinson were both there from New Holland Publishers, as well as Nick Turzynski who did the amazing design work. Maria Gill said some very kind words in introducing the book, the National Library staff were wonderful hosts and and John Graham from Paper Plus was a very genial bookseller.

Posted by Philippa Werry at 06:46 No comments:

Thanks to everyone - friends, family and members of the writing community who came along to one of the two book launches for my new book Anzac Day: the New Zealand story.

The Wellington book launch was very kindly hosted last Thursday by John and Ruth McIntyre of the wonderful Children's Bookshop in Kilbirnie, and Stephen Clarke, Chief Executive of the RSA, did the honours of formally introducing the book.

Posted by Philippa Werry at 03:45 No comments: