Great launch last night for the New Zealand Festival Writers Week (7 to12 March). Kathryn Carmody's speech was full of thanks to others, but she has done an amazing job of putting together a wonderful programme. She said that two words embody the thinking behind this year's programme: "identity" and "community",  but it's also the best programme for years for anyone interested in writing for children and young adults.

You can choose from sessions with Swedish writer Ulf Stark, Belgian illustrator Leo Timmers or Polish designers Aleksandra and Daniel Mizielinksy, who produced the brilliant H.O.U.S.E. and D.E.S.I.G.N. books. Kids' Lit Quiz creator Wayne Mills will talk about the results of a survey of NZ children's reading habits, and there are two sessions with Francis Spufford, author of The child that books built. There are two workshops for illustrators (lucky them), a session on how to read a classic picture book in te reo Maori  and a free event featuring favourite NZ writers such as Joy Cowley and Kyle Mewburn  reading stories from Te Papa's new anthology The Curioseum.

That's still not all! On Monday 10 March, Gavin Bishop will deliver the 2014 Janet Frame Memorial Lecture, an annual literary "state of the nation" speech sponsored by the NZ Society of Authors, in which he promises to focus on "the value and standing of children's literature and of illustration".

But of all of those events (with Gavin Bishop's' speech a close second), the one I am most looking forward to is an hour with much-beloved NZ writer Jack Lasenby, talking to Kate de Goldi about his books for children. Saturday 8 March at 12.15pm.

And I haven't even mentioned Eleanor Catton, a session by Weta on special effects in the Hobbit movies and an intriguing sounding reading experience at the National Library.

Get a copy of the programme and book a ticket as soon as soon as you can! Book several tickets - I know it will be hard to choose!
Posted by Philippa Werry at 13:03 No comments:

We usually spend a week or so at the beach over New Year, and there are always piles of books lying around, in various stages of being read by various people. (You have to keep a close eye on your own book if you don't want it to disappear into someone else's hands - although several people this year had their own Kindles or e-readers, which lessened competition a bit.)

I didn't read many books, because I was ploughing though one that was over 600 pgs long (no, not The luminaries): Iron curtain - the crushing of Eastern Europe by Anne Applebaum. It was a Christmas present and the blurb on the back cover claimed it was chosen 16 times as a Book of the Year - actually, that could mean anything, but I dipped into it and then got hooked by realising how little I knew about the subject, and how much made sense afterwards.

It's scary really how much we skate over the surface of current or historical events with only a vague idea of what happened or is happening. I didn't even have a clear idea of how or when the area we call "Eastern Europe" developed into that eastern bloc, or what it meant for the people who lived there. We often think of the end of World War Two as a time of "liberation" for countries that were occupied, but for millions of people in Eastern Europe, the end of the war signalled the start of something almost as bad, or even worse. Anne Appelbaum tackles the subject both historically but also thematically, so there are chapters on, for example, "Reluctant collaborators" and "Passive opponents" -  about the situations that ordinary people found themselves in, and the moral decisions they had to make about how they would behave.

We also covered a lot of kilometres this summer, so before we set off I borrowed five audio books from the Central Library. It cost $15, but was well worth it. We got through all 12 disks of Kate Atkinson's One good turn : a jolly murder mystery. 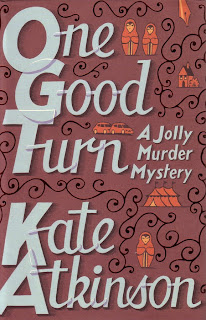 I'd already read One good turn once, if not twice, but it was a joy to listen to, and I was surprised to remember what a different experience it was from reading in private. Kate Atkinson is so clever and witty that some of her sentences just make you laugh out loud. Listening to the story being read also makes more obvious the way that words, phrases and themes keep repeating and echoing each other - just like the sets of Russian dolls that keep appearing. And when you are taking out and replacing disks, you get a sense of the passage of time in the book, because it's fascinating how little actually happens in the beginning disks, compared to how much you think is happening (because Kate Atkinson is constantly dipping in and out of different characters' heads, which gives you a richer sense of their lives.)

Monica Ali's Untold story was also very entertaining,  and we got through about 4 disks but will have to finish it on paper. Interestingly, the collection of stories by Neil Gaiman wasn't nearly as successful, just because it was harder to make out his words. The other books are narrated by professional actors and they were perfectly clear and easy to follow. We'll certainly trawl through the library shelves again next time we are setting off on a long drive.

Summer listening also includes catching odd bits of interviews on National Radio, and coming home to replay them on the Radio NZ website. Wonderful interview here with Marcus Zusak, author of The book thief, who has some great things to say about writing, even if he sounds disconcertingly Australian.

I liked how he talked about the way that readers respond to a story that means everything to the writer. I liked this: "It took 14 years or even longer of writing, and previous books as well, for me to get to the point where I could write The book thief." I loved the way he talked about his childhood and how his first research for the book had been listening to his parents, who were teaching him how to write by telling him their stories (like "a little piece of Europe that came into our house".)

He also had a great description of writing a book, comparing it to building a brick wall: "you don't want to put in too many bricks, you don't want too many gaps but you want every brick to be necessary."

Posted by Philippa Werry at 00:07 No comments: