Since its opening in 2002, the Wellington Writers Walk has become one of the showpieces of the city, honouring local writers and proving a fascinating addition to the urban landscape.

On Thursday 21 March, the harbour was sparkling, the waterfront was crowded with people enjoying the balmy sunshine - it was a perfect evening for the unveiling of Stage IV of the walk. Four new benchmark sculptures have now been added to the existing 19 works, making a total of 23 authors whose work is celebrated in this way.

Speeches in Circa Theatre included one from Governor-General Sir Jerry Mateparae who is joint patron of the Writers Walk with his wife, Lady Janine.

Invited guests and members of the public then walked to each new plaque in turn for its unveiling. First was Sir James McNeish, whose benchmark is situated on the bridge behind Te Papa leading to Waitangi Park and Chaffers Marina. Elizabeth Knox’s benchmark was unveiled at a temporary spot before being installed near the Meridian Energy Building, Customhouse Quay, in front of Michael Tuffery’s kina sculpture. (Breakfast TV did a live cross to cover this on Monday 25 March.)

Joy Cowley’s benchmark is on the lower walkway, quite close to the Katherine Mansfield plaque (you might need to lean over the fence to see it.) Reading out her quotation, Joy commented how people complain about the Wellington southerly, but forget to praise the gorgeous day that often follows it.

Jack Lasenby’s quotation is placed sideways on a pole near the Wharewaka. Jack declared that he was sure the local seagulls – one of which obligingly came and perched on top of the pole - would now be flying around with cricked necks as a result.

Sponsors of the new quotations are The Todd Corporation for James McNeish, The Deane Foundation for Elizabeth Knox, Mark and Wendy McGuinness for Jack Lasenby and Jenny Morel, Allan Bollard and Penguin Books for Joy Cowley.

This was a great event, bringing together many writers and members of the literary community to celebrate and enjoy what is a very special part of our city. It has been an exciting couple of years for the Writers Walk, which also featured at the Frankfurt Book Fair and launched a wonderful new website and Facebook page.

Thanks to Rosemary Wildblood (Chair of the Wellington Writers Walk Committee)  for the lovely photos.
Posted by Philippa Werry at 11:22 No comments:

Thanks to New Zealand Book Month for sponsoring my trip to Taihape, and a BIG thanks to Kate in the library who organised my visit and put together some great displays and posters. Thanks also to the people of Taihape who came along to my talk on Sunday afternoon, to Katherine in the local Paper Plus for stocking plenty of copies of my new Anzac Day book and to the Year 7 and 8 children from St Anthony's and Taihape Area School who proved such attentive listeners on Monday morning.Kate had also borrowed a selection of war mementos from the  Taihape Museum. Most of these were put in a display case for people to look at, but the children were fascinated by the World War One One lemon-squeezer hat and World War Two metal hat, which we let them (carefully) pass around.

So what did I learn about Taihape:

And what about the children from St Anthony's and Taihape Area School - what did you learn? Well, I hope you found out a bit about what it's like being a writer - and if you've got any more questions, please email me through my website and I'll promise to answer them!

Posted by Philippa Werry at 00:30 No comments:

The New Zealand Book Month site is here, full of news of activities all around the country.

Do your bit to support New Zealand Book Month - look up an event near you and go along to it; even better, use your $5 voucher to buy a book by a New Zealand author!

Posted by Philippa Werry at 03:10 No comments:

Have you won any awards?

Have you won any writing awards?

This is another question I often get asked. Like the previous two that I've described (how many books have you written? and how long does it take to write a book?) it's not always easy to answer -  but perhaps for a different reason. I'm enjoying pondering on a few responses to these questions so that next time I get asked them, and I'm floundering for a coherent response, at least I'll know that it makes sense on my blog.

The short answer is yes. I can recite a list of awards I've won or been shortlisted for.

But what is a writing award? It can be as grand as the Booker, or it can be a regional short story competition - do they both make you into an "award winning author"?

Another reason I'm ambivalent about this question is that I've been on judging panels myself, and I know how hard it can be to reach a consensus - and that a different panel of judges would probably have come up with a totally different winner, and quite possibly a different shortlist as well.

I think the "award winning author" category is used by teachers to help students pinpoint someone to study - because students are often the ones emailing the question. It can work for that purpose - but I'm sure that somewhere on Google there will be a list of "authors who never won a major award."

Wellington on a good day

As they say, you can't beat Wellington on a good day - and there have been a string of them lately. 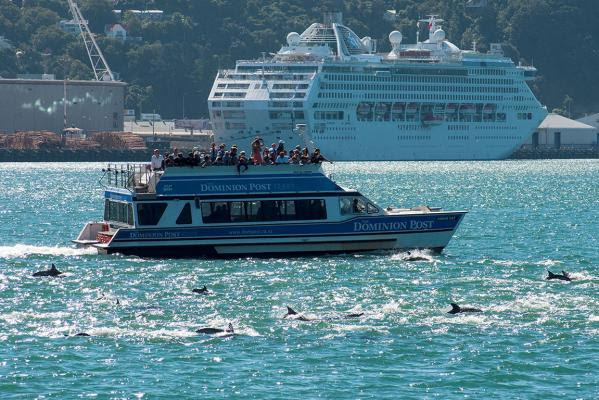 One of the best was on Thursday - the official last day of summer (but it seems to be continuing!) when a pod of dolphins came into the harbour. This video was put together by Ro Tierney who also made the beautiful short film Snow on Cuba St, back in 2011 - seems hard to believe with this weather we're enjoying at the moment.
Posted by Philippa Werry at 06:28 No comments: