St Peter and the Gruffalo

The only thing I knew about Julia Donaldson before going along to her talk at St Peter's last night was that she had written The Gruffalo and a slew of other appealing picture books, many illustrated by the same person (Axel Scheffler).

I didn't know that her writing career grew out of her songwriting career, or that in their younger days, she and her husband Malcolm (then a medical student, now a doctor) went busking all around England and Europe.

I've since read more about her life, including the sad and moving story of their oldest son, a much-loved but obviously challenging and difficult child.

I didn't expect the talk at St Peter's was going to be such an interactive performance, so hats off to the four audience members who so bravely volunteered (or were volunteered...) as hen, goat, pig and cow for the retelling in song of Julia's first picture book A squash and a squeeze.

Julia and Malcolm had already put on a musical show for 250 children in the morning, in the same venue, and I doubt that St Peter's will ever again witness anything to match the hilarious sight of Malcolm (as Gruffalo-fox-owl-snake) chasing Julia (as the little mouse) up and down the aisles.
(You can see a video clip of the two of them in action here.)

Introduced by John McIntyre from The Children's Bookshop in Kilbirnie, and chaired by Wellington picture writer and illustrator Ruth Paul, the rest of the session covered Julia's introduction to the world of picture books and educational publishing and how the story of The Gruffalo developed. She and Ruth also talked about the relationship between author and illustrator, especially in the mind of the public (in Germany, Julia noted, Axel's name always appears first on the cover) and her work as Children's Laureate in England, particularly her support for public libraries.

There was time for a few questions from the audience - a good one about "how do you know if an idea for a picture book is worth pursuing?" - before Julia and Malcolm performed their Gruffalo act, and two people from Huia Publishers read us the first few pages of The Gruffalo (Te Tanguruhau) in te reo Maori, one of 57 languages it has been translated into.

I had an interesting chat with the lovely Huia ladies afterwards and was intrigued to learn more about how Brian Morris went about translating the text (in fact there's a Booknotes interview with him here). Julia and Malcolm were obviously charmed by the reading and also delighted to be here soon after the appearance of Monkey puzzle in te reo (Kei hea taku mama?), also published by Huia.

You can find some lovely photos of Julia here, including one of her and Malcolm busking in Bristol.

Thursday night was gridlock night in Wellington traffic, so if you were aiming to come along and missed it, or got there late, you can also hear Julia talking to Kathryn Ryan on Nine to Noon.
Posted by Philippa Werry at 20:20 No comments:

What I expected from Waitangi Day at Waitangi

What I expected:
Why did I think that? I guess it was based on media representations of the day, seeing as I know very few people who have actually been there for Waitangi Day.

It was "no vacancy signs" at all the motels in Paihia.
It was flags flying from cars, houses and tents: the United Tribes flag and the Tino Rangatiratanga flag.
It was hundreds of people turning out for the dawn service at 5am, listening to karakia and singing hymns, some inside, some standing under a starry sky outside, kids lying under blankets.

It was families with children, grandparents with grandchildren, foreign tourists and backpackers; people in wheelchairs, or driving mobility scooters; kids in pushchairs; people having picnics, sitting on rugs, on chilly bins, on fold-up chairs, on the grass, in the shade under the trees.
It was kids climbing trees, swimming off the beach, jumping into the water off the bridge.
It was people eating, listening to music, playing cards, resting or asleep on mattresses, watching the performances on stage: people with and without sunhats, tattoos, sun or rain umbrellas; people of all backgrounds, shapes and sizes (although, unfortunately, that did show the extent of the obesity problem that we have to tackle in NZ.)

It was catching snatches of te reo, and being able to understand some of it from my community  high school te reo classes.

There were stalls selling candyfloss, hot dogs, fruit icecreams, burgers, marinated mussels, watermelon, arts and crafts and, yes!!! coffee!!!
There were stalls for health and education providers,
a special corner of a tent for kaumatua to rest in,
a bouncy castle,
funfair rides,
bands playing on the three stages,
kaka haka groups practising before their turn on stage, and local people cheering for their own groups.

There were TV crews, waka crews and people gathered in fascination and admiration around the waka.
There were speeches, hymns, and frequent calls to pick up litter.
There were queues to buy food, to drive over the one-way bridge, to go through the Treaty House, queues for the toilets, for shuttle buses back to the car park.
There were HMNZS Canterbury and Te Kaha anchored off shore, and the Navy providing the 100 man guard and the 21 gun salute, and the Navy band keeping us amused with their funny and deft marching manoeuvres.

I guess the thing that really struck me was that when I've been to Waitangi before, it has felt like a place where we remember events that have happened in the past.
But this time, even though there were plenty of references to the events of 175 years ago, it felt like a place where things were happening now, where people journeyed to talk and discuss and protest and try to work things out.

It was great - it felt inclusive, welcoming, friendly. It felt like a time and a place to think about being a New Zealander and what that means.

In the evening, in the dark, it was the sound of celebratory haka floating up to our motel from the waka crews down on the river.


Posted by Philippa Werry at 22:51 No comments:

These are photos of Oihi Bay - an empty beach, but full of history!

During my research trip  to Waitangi, I visited a lot of the sites mentioned in the book. Some of these were places I'd been to before, but some were completely new to me.

One of these discoveries was Oihi (or Hohi) Bay. When we reached the carpark (after a long winding drive) we weren't even sure where the track went. Marsden Cross is visible if you know where to look, but we couldn't see it at first. 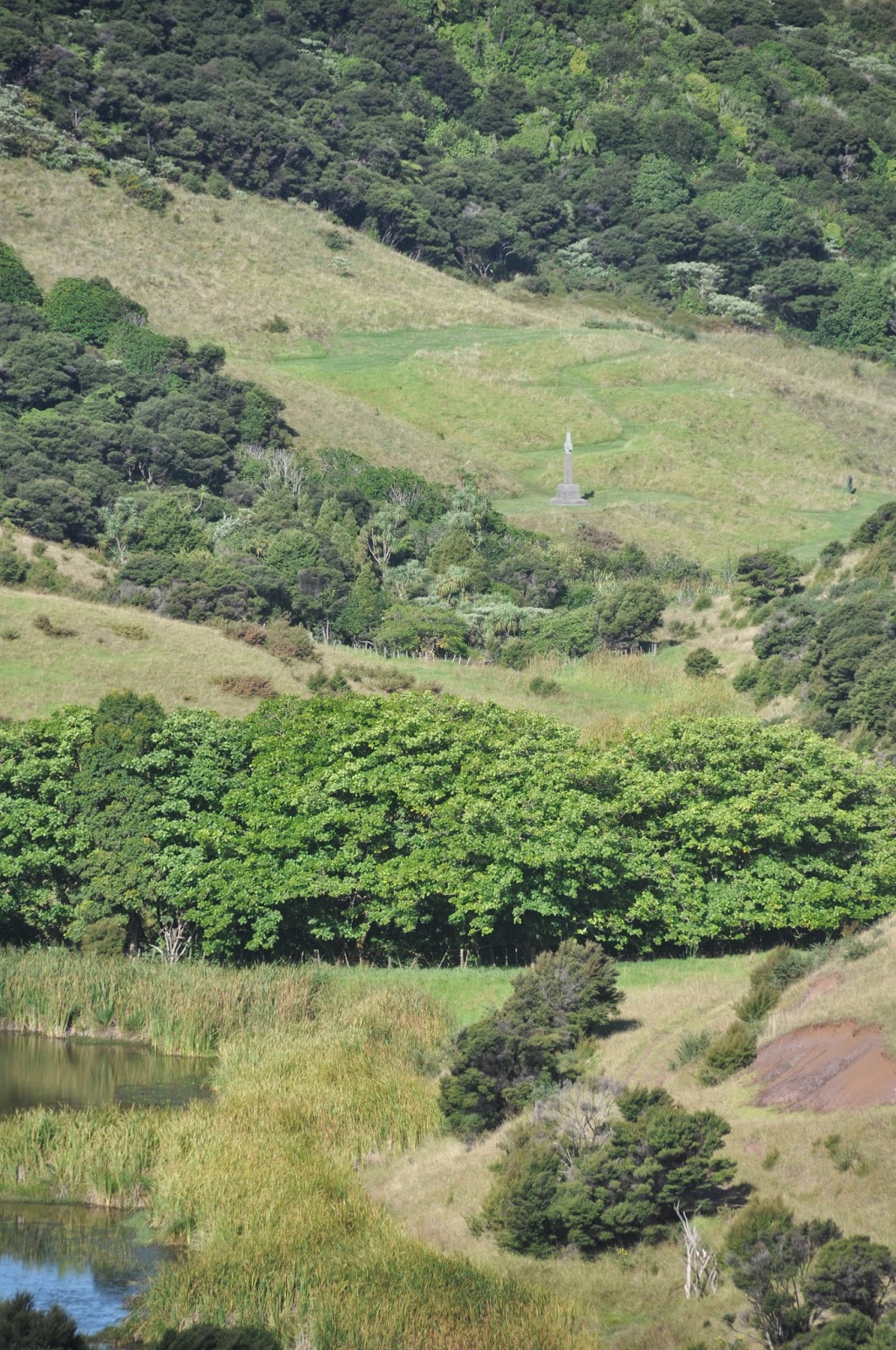 But then we found the track, and the Cross, and Oihi Bay - such a beautiful spot, and nobody there except us! 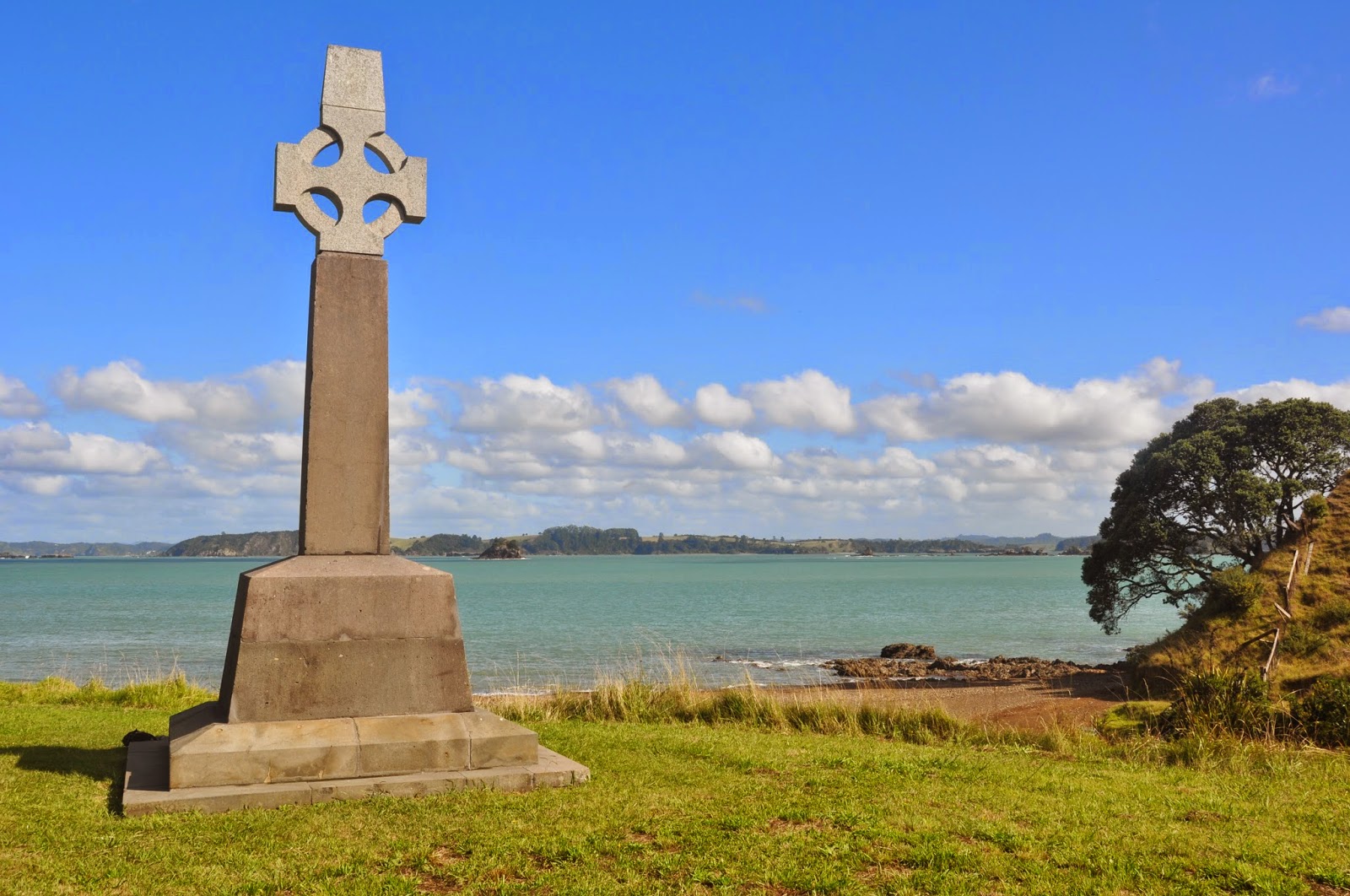 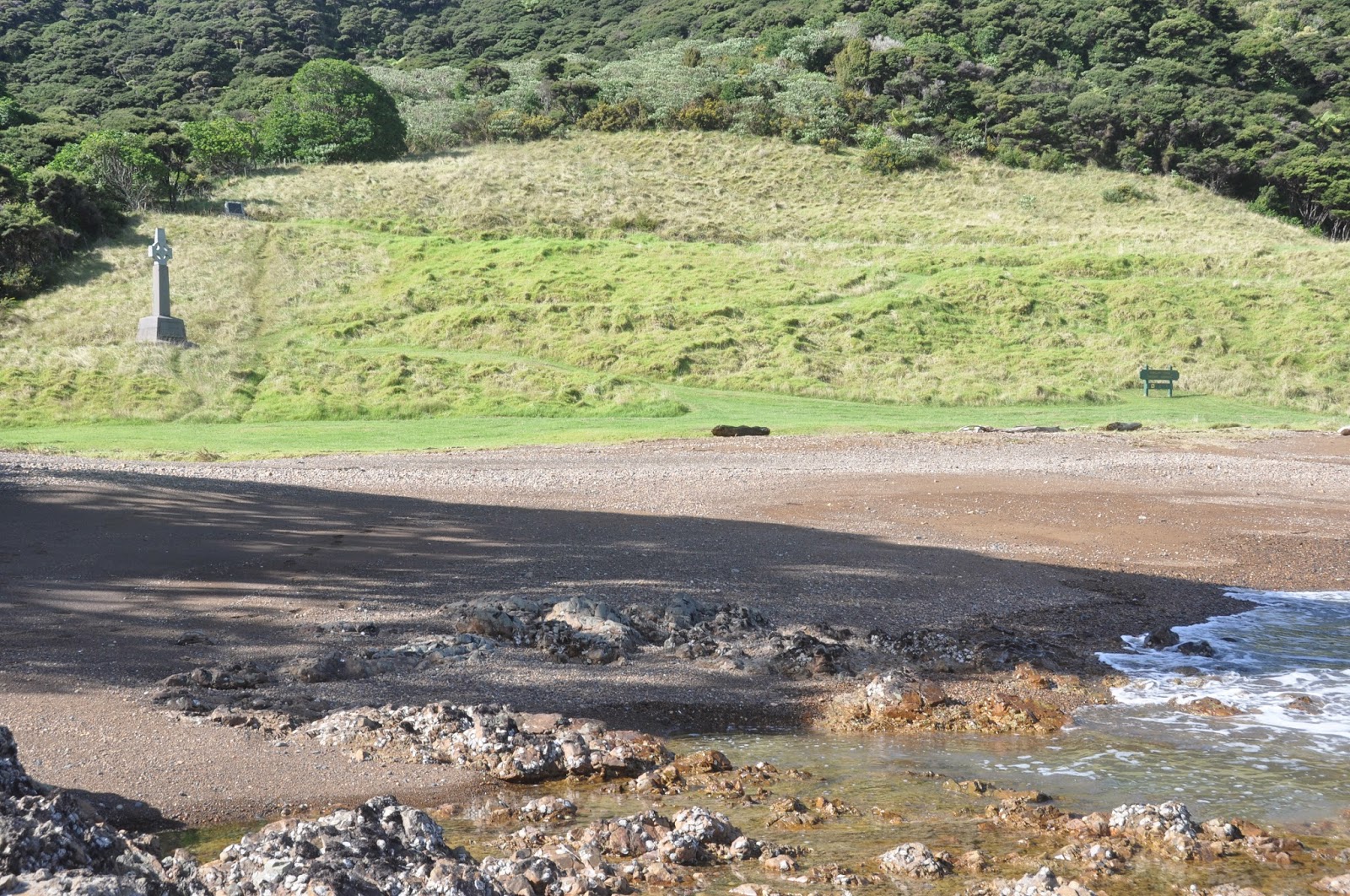 Oihi Bay is where Samuel Marsden conducted his Christmas Day sermon in December 1814. You can read more about it on pg 11 of my Waitangi Day book.


Posted by Philippa Werry at 16:36 No comments:

This is a photograph of the stained glass window in St Mary's Church, Lydney, Gloucestershire, England. The reason behind the New Zealand-themed window (that's the Franz Josef Glacier in the background) is all to do with Lord Bledisloe.

It was Lord Bledisloe who bought the house (once owned by James Busby) and surrounding land at Waitangi and gifted it to the nation in 1934.  If it wasn't for his generous gift, we might  not have the Treaty House today. (You can read more about him on pg  21 of my Waitangi Day book - and did you know that he donated the Bledisloe Cup as well?)

Lord Bledisloe was a very popular Governor General, for a number of reasons, and he and Lady Bledisloe felt a special link to New Zealand for the rest of their lives. When they returned to England, Lord Bledisloe donated this window to his local parish church.

This was one of the images that took a while to track down, and in the end it arrived too late to go in the book, but I still like it!


Posted by Philippa Werry at 23:00 No comments: 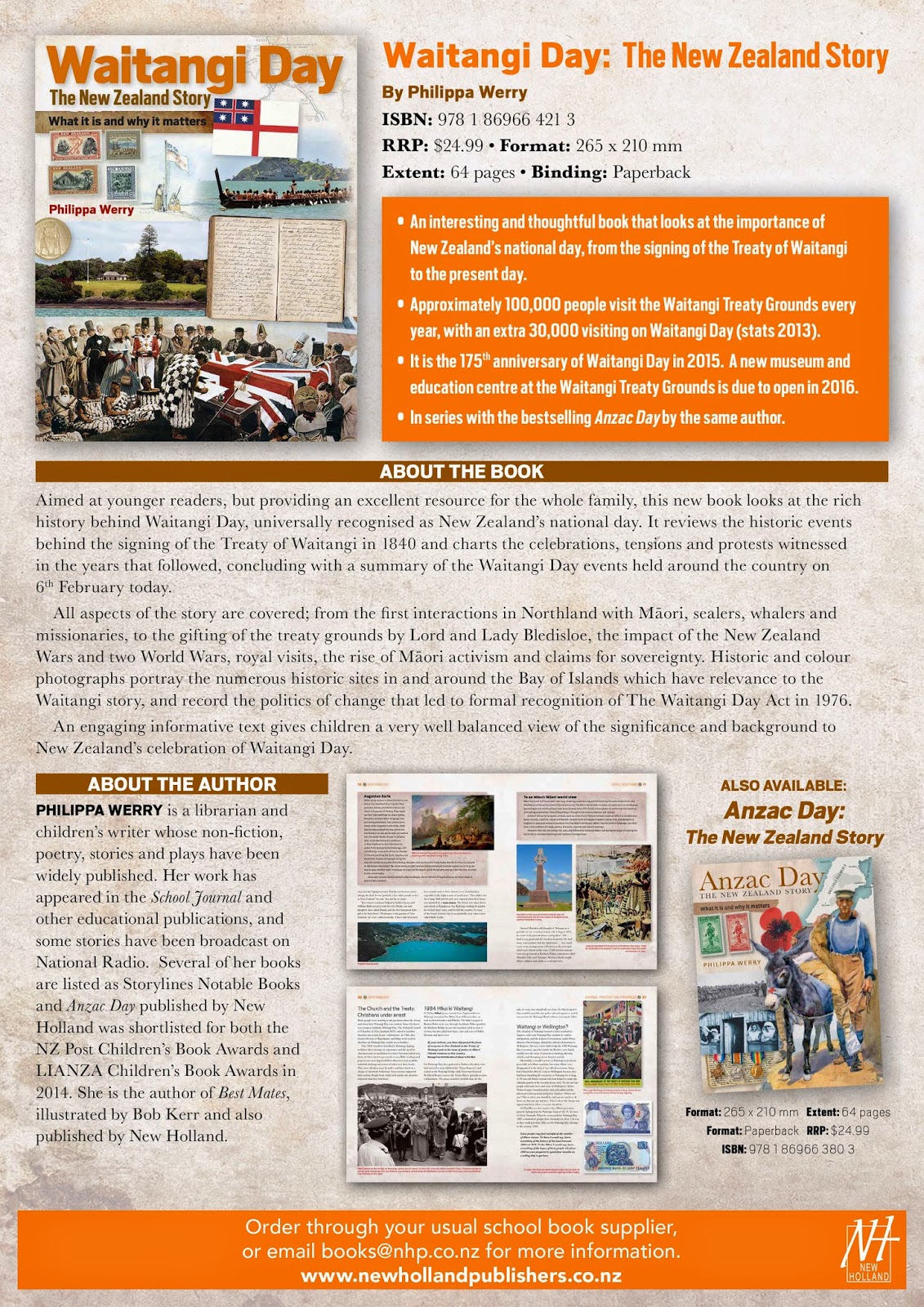 Posted by Philippa Werry at 22:55 No comments: