It's a strange and unsettling world at the moment, but at least we still have books! Some libraries are temporarily closed, but you can support our Kiwi authors and wonderful local bookshops like Unity Books and The Children's Bookshop by buying in person or online.

If you like travel books - here's a brand new title to start with! 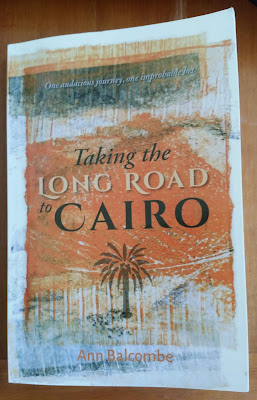 Kiwis have always been great explorers of the world, but Ann Balcombe’s adventures are extraordinary even in the context of the freewheeling overland days of the 1970s.

Newly graduated and at a loose end, she took a job as deckhand on a yacht sailing from Auckland to the Netherlands across the Pacific and Indian Oceans. Wild and terrifying storms alternated with the peace and beauty of their stopovers at little-known island groups. The inevitable friction between crew members, the exhaustion of long distance sailing and the difficulties of living in such cramped conditions form a constant backdrop and were part of the reason why Ann decided to leave the yacht in Durban.

The next stage of her journey covers the 10,000 km from Cape Town to Cairo in the company of a good Aussie bloke called Jim, but before this comes several months spent employed as a companion to an elderly grandmother in the home of a family under house-arrest for their anti-apartheid sympathies. I found this chapter (“Face to face with political reality”) quite fascinating, for the portraits of the family members and the description of what this house arrest and surveillance involved, and the way it describes Ann’s growing awareness of what white privilege meant, and the reality of life for white, black and coloured in South Africa of that time.
Ann was entranced by Africa: the landscape, the history, the people and the wildlife, and developed a love for the continent that saw her return six times over the following decades. But this original journey, for which she draws on her travel journals of the time, recounts her and Jim’s progress by train, bus, truck, van, felucca, donkey, bike and camel as they make their way toward their destination. Well-drawn and clear maps track their route from South Africa through Swaziland, (then-named) Rhodesia, Mozambique, Malawi, Zambia, Tanzania, Kenya, Sudan and  Ethiopia to finally reach Egypt.

In a world where overseas travel has suddenly been abruptly curtailed, Ann’s travel memoir is a refreshing look back at an age when a different sort of travel  was possible: two years with no timetable or deadline, camping outdoors or staying in youth hostels, cheap hotels and even police stations, passing through areas that were turbulent with unrest, facing difficult border crossings and never knowing what the next mode of transport might be.

Many journeys were hot, grimy, crowded and supremely uncomfortable; hours or even days were spent on the roofs of trains or trying to sleep on hard, bumpy salts of sack on the back of a truck. But Ann and Jim coped with endurance and good humour, and found the hardships more than compensated for by the grandeur of what they were seeing: lakes, deserts, beaches, National Parks, animals and birds at close waters, markets, festivals, the rock-hewn churches of Ethiopia, the Nile and at last the Pyramids.
This book will appeal to anyone interested in Africa – its people, history and geography, in ocean-going yachting, or in the world of the 1970s, and those days of travel before GPS, online guidebooks, mobile phones or email.

Posted by Philippa Werry at 15:53 No comments: