November 15 is marked around the world as The International Day of the Imprisoned Writer. This was started in 1981 by PEN, the international writers’ organisation, to acknowledge those writers around the world who are subject to political, economic or other forms of repression.
Here in New Zealand we call it Courage Day, but many people don’t know why, or assume it is called Courage Day across the world, because the name seems so appropriate.
New Zealand Society of Authors (NZSA) members are encouraged every year to mark this day in some way. In the past, we have had some compelling speakers who have helped us to explore the idea of courage in writing.
This year, a small but committed group of NZSA Wellington branch members met on Thursday 13 November to explore the meaning behind Courage Day and to remember, acknowledge and support those writers who are imprisoned or in danger because of what they write.  An empty chair stood as a silent representative of those who cannot come to this or any other meeting because they are in prison or under restraint, due to their writing.

Courage Day is named after two writers, Sarah and James Courage (grandmother and grandson). You can read about them on the Christchurch City libraries website.
Sarah Amelia Courage (1845? – 1901) wrote a memoir in about 1896 called Lights and shadows of colonial life: twenty six years in Canterbury, New Zealand (by “A settler’s wife”). Many copies were burned by angry neighbours who didn’t like what she had written about them. James Courage’s 1959 novel, A way of love, was banned as indecent because he dared to write about homosexual love.

Heather Hapeta reminded us of other NZ writers and artists whose work has been banned over the years, including Eddie Rout (Safe marriage, 1926), Jean Devanny (The butcher shop, 1926) and Ans Westra (Washday at the Pa, 1964).

Maggie Rainey-Smith spoke about the jailed Australian al-Jazeera journalist Peter Greste, imprisoned in Egypt with two colleagues since June 2014 on charges of “aiding terrorists, smearing Egypt, and doctoring footage”. A newly issued decree allowing the deportation of foreigners accused of crimes on Egyptian soil is news that may hopefully lead to his release. Maggie spoke of hearing his mother interviewed on Radio NZ about how heart-wrenching it was to see her son appear in a Cairo court, shackled and without a translator. Elsewhere, Lois Greste has described visiting her son in an Egyptian prison for the first time as one of the most difficult days of her life.
Lesley Marshall is the NZSA Writers in Prison committee co-ordinator and sends out numerous postcards to imprisoned writers. Recently she received a reply from Aron Atabek, a Kazakhstan poet imprisoned for writing a book critical of his government - and not just a reply but a poem, which Frances Cherry read out for us.

There is an empty chair in New Zealand –
Kept for me on writers’ congress,
That is the God to turn me –
Back to an ‘environment’, to a writer’s place!


Every year, PEN international highlights the situation of a number of particular writers. This year they included poet and writer Enoh Meyomesse, currently held in prison in the Cameroon, and I read out a brief bio of his work and an excerpt from his prison journal:
"... what's hardest for me is my eyesight. After those 30 days in total darkness in Bertoua, it's starting to go. My greatest worry these days is that before long I'm going to find myself totally blind..."


New Zealand PEN page
PEN InternationalFacebook page
'I hope that you find comfort in the fact that your words echo far and wide, reaching hearts and minds beyond the bars of your cell, beyond the walls of your prison, reminding us that the freedom of speech is worth fighting for.' (Elif Shafak writes to imprisoned Chinese writer Gao Yu.)
Posted by Philippa Werry at 16:55 No comments:

It's hard to open a paper today (or look at a news website) and avoid reading about some WW1 centenary-related news item, artwork, installation or other commemorative event.

The poppies spilling out of the Tower of London poppies look breathtaking, and have attracted millions of visitors and lots of media attention. This dramatic installation by by ceramic artist Paul Cummins, titled Blood Swept Lands And Seas Of Red, is due to be dismantled on 12 November (the day after Armistice Day), but it has proved so popular that the hours of floodlighting have been increased and there have been calls for it to be extended. Volunteers have helped to plant the poppies in the moat and more volunteers will help to remove them. All of the 888,246 hand-made poppies have already been presold online, raising more than 15 million pounds for charity. 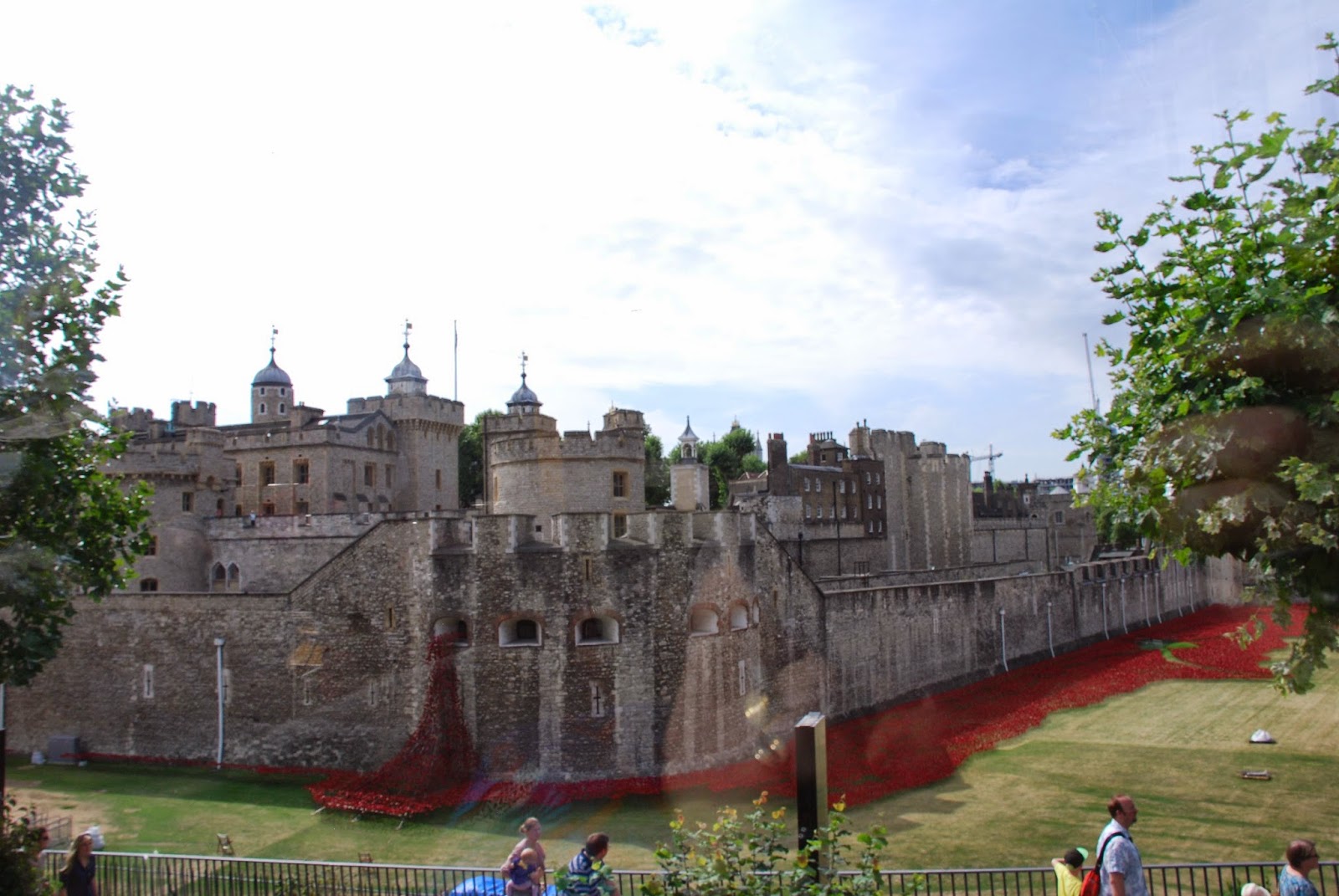 The installation is visually stunning, but there have been some thought-provoking responses to it. The Quakers have created a map to show how much of London would be covered if the poppies represented all the of the 19.5 million people from every country - soldiers and civilians, allies and enemies - and not just the British dead. And a challenging article by Jonathan Jones in the Guardian claimed that "an adequate work of art about the war has to show its horror, not sweep the grisly facts under a red carpet of artificial flowers."

An ad campaign that has also attracted some controversy is Sainburys' Christmas ad, based on accounts of German and Allied troops celebrating Christmas together in the trenches. Is it disrespectful for a supermarket to use WW1 to sell groceries? Or is is a reasonable and fitting way of letting people know what happened?

Here in Wellington, a number of buildings were illuminated over several nights with scenes of soldiers, war and New Zealand during the war years. 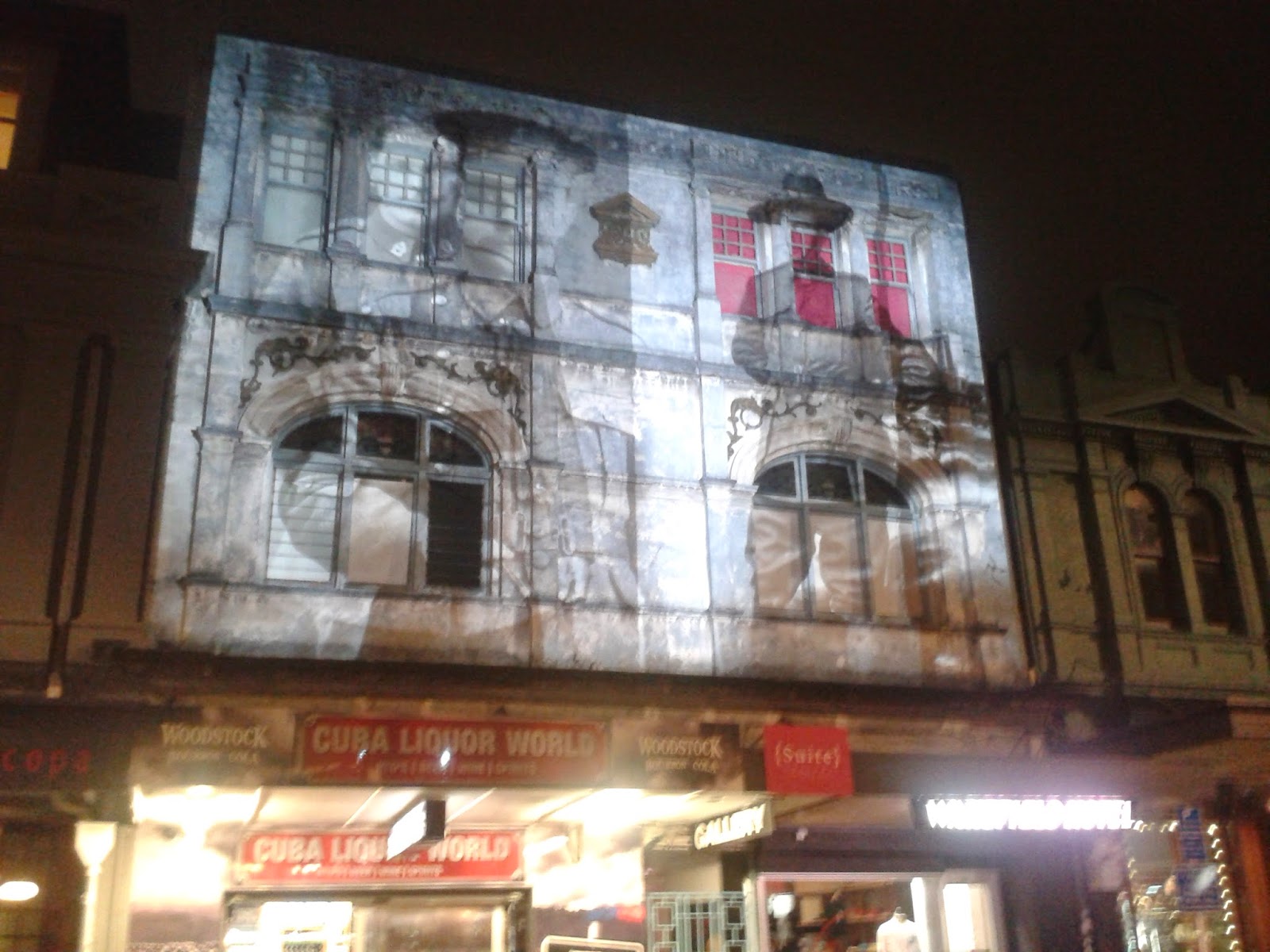 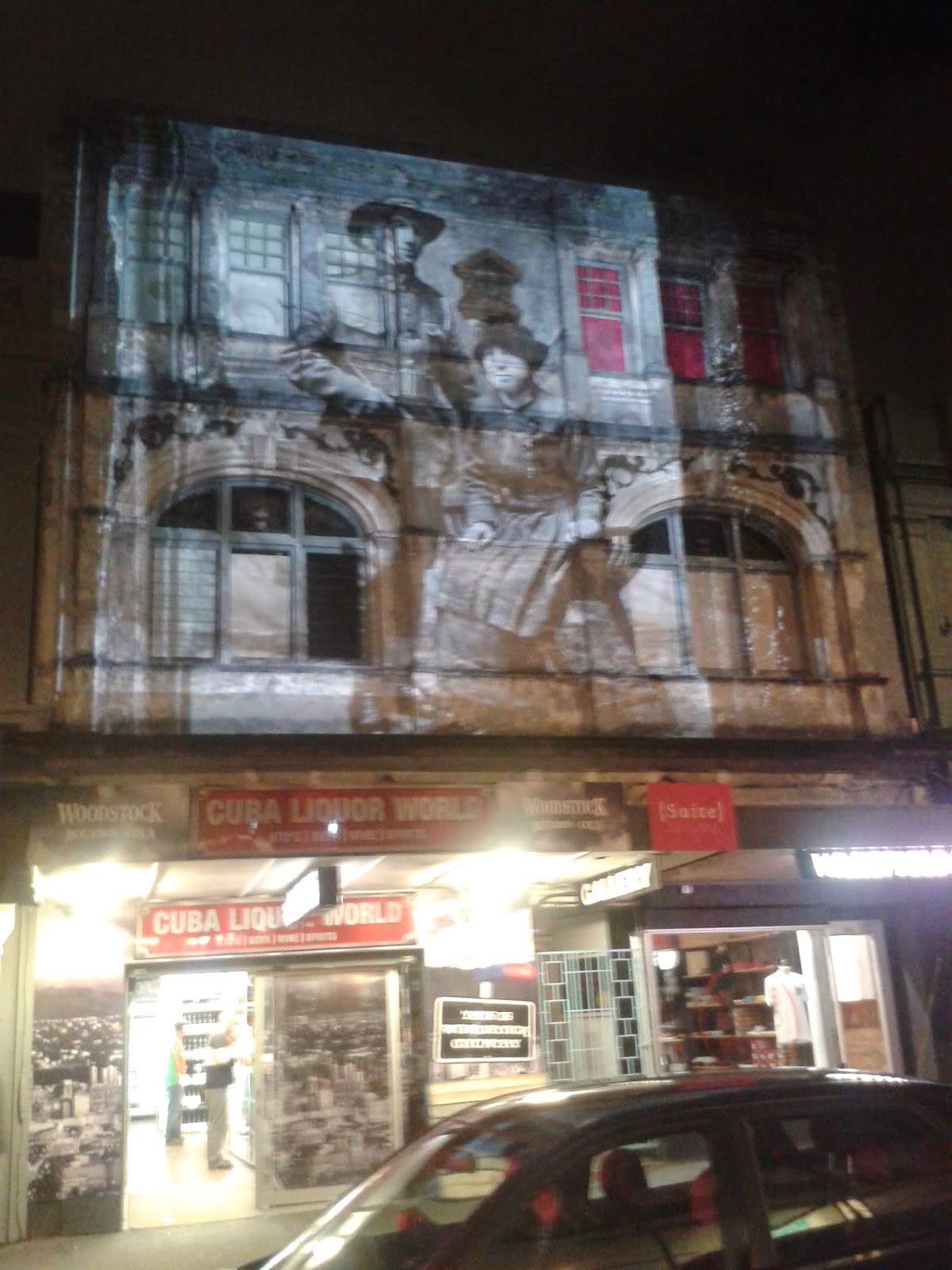 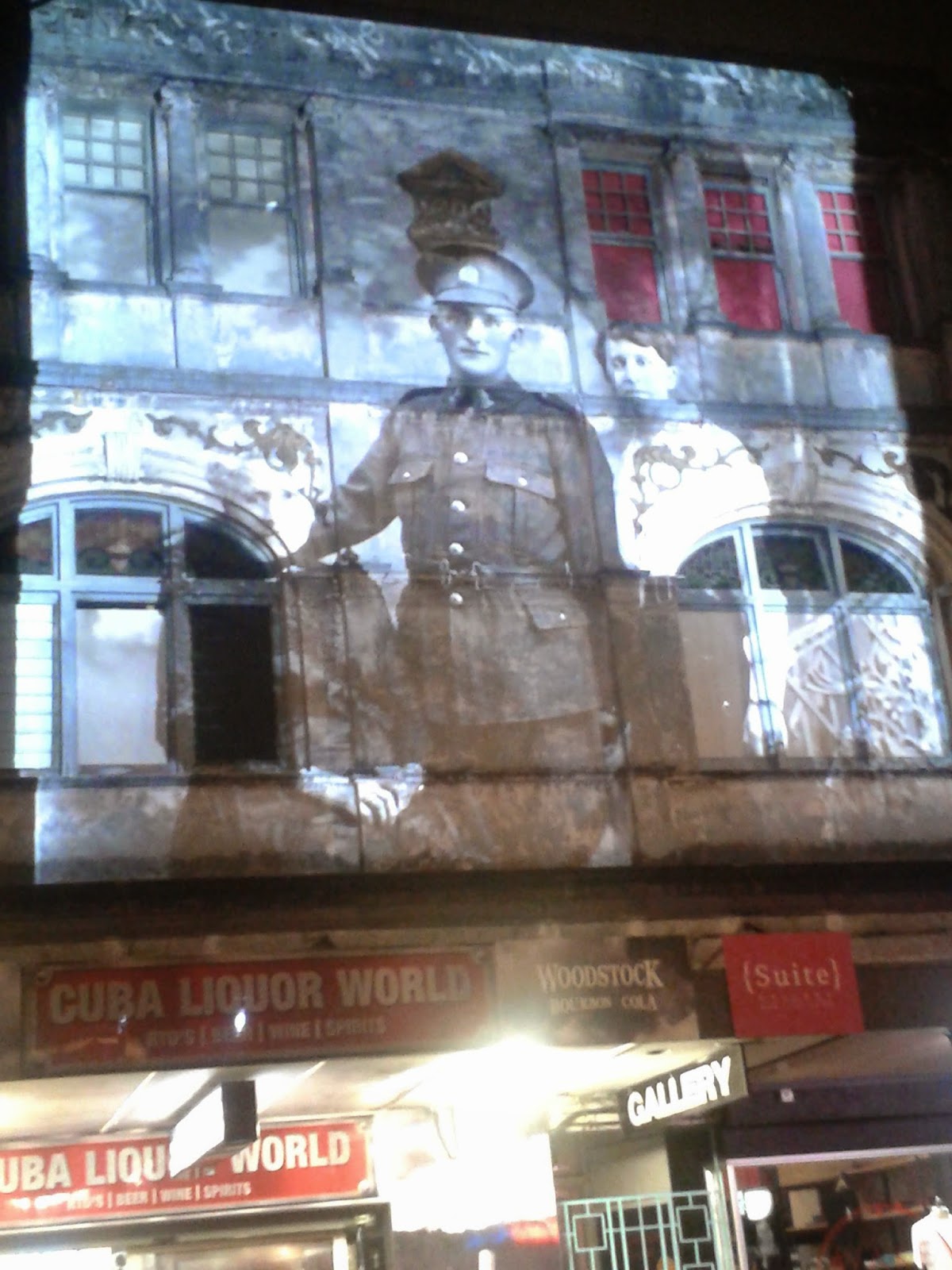 It's fascinating to see how people are choosing to remember the events of 100 years ago, but I think we have to keep reminding ourselves over and over what it is that we are remembering, and how we do that in the best and most meaningful way.
Posted by Philippa Werry at 21:07 No comments: