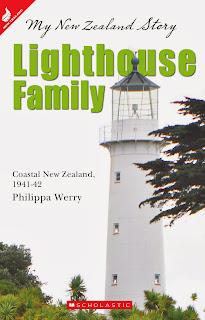 Lighthouse family is part of the My New Zealand story series, published by Scholastic. Each book in the series focuses on an aspect or period of NZ history - for example, the Wahine storm, the Tangiwai rail disaster, the Rainbow Warrior bombing and the Springboks tour. (It's slightly sobering to realise that an event which some of us can remember counts as history for the next generation of children!)


I've been fascinated for a long time by the idea of lighthouses, and what it must have been like to live on a lighthouse station. Then some research I was doing for another piece of writing led me to the story of the Niagara, sunk by mines off the Northland coast in 1940. Who knew that German ships had sailed down our coast during the war, laying mines? Not me! I knew about the bombing of Darwin, but not that midget submarines had invaded Sydney harbour.

Later I found out even more astonishing stuff. Submarines had been lurking round our shores as well. Japanese float planes had carried out reconnaissance flights over our cities. One person told me a story of people living on a lighthouse station who had seen men from a submarine coming ashore at night for fresh water. The combination of lighthouses, war and the threatened Japanese invasion started to turn itself into a story in my mind.

Lighthouse family comes out in November 2013 so hopefully it will be in bookshops very soon.

Posted by Philippa Werry at 16:06 No comments: