Seven years after marking Anzac Day at Gallipoli with the wonderful group of Gallipoli Volunteers (and some thousands of others), it felt very special today to be at another Anzac Day service beside the sea, as the local community gathered on a still and sunny morning at Paekākāriki.

Another special thing about this service was that nearly everyone who spoke or carried out an official function was a woman: MC Janet Holborow, the woman who called the karanga, the representative from the Turkish Embassy, the minister who gave the Prayer of Remembrance and the benediction, Alex Haddow who sang (beautifully) the NZ National Anthem and Po Atarau - Now is the Hour, Sunny Amey who read (beautifully) Binyon's Ode of Remembrance, Paranahia Broughton who read the Roll of Honour and Lieutenant Jaiselmer Keivom-Lockhart who gave the Memorial Address.
"What last year taught us was that there are many ways in which we can serve our country" - Lieutenant Jaiselmer Keivom-Lockhart.
Yet another special feature was that for the first name, the names were read out of the ten US marines who died in a training exercise off Paekākāriki beach on 20 June 1943. Before her reading, Sunny Amey shared her memories of being at secondary school during WW2 and having US servicemen come to their home for lunch every Sunday. 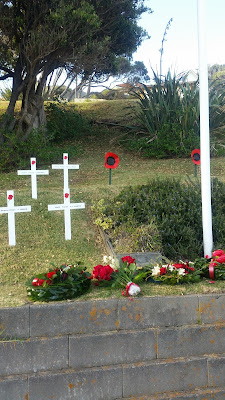 Across the road from the Paekākāriki Memorial Hall, the surf was up and the surfers were marking the day in their own way - you can just spot a couple of them in the bottom photo. 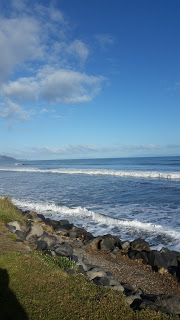 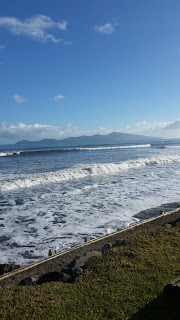