...... and I had no idea just how amazing they could be. In fact, I'd never thought much about pop up books at all, but thanks to last night's WCBA event on Paper engineering, I'm a lot more knowledgeable. I now know that the proper term for them amongst serious collectors is "movable books" (which encompasses wheels that turn and tags that pull and 3D reconstructions and anything else that moves, not just bits that pop up), and that their history dates back to the work of a 13th century monk.

Our speaker was Trevor Morley, who collects pop up books. A couple of people brought their children along and it was great to see these boys sitting on the floor right at the front, gazing spellbound as Trevor opened up yet another astonishing page. A silver stage coach with six horses, and a side window showing a rat that turned into a coachman as you opened it. The tea party in Alice in Wonderland, and a whole pack of cards soaring up into the air. Glowing light sabres in a Star Wars book, operated by a secret switch and a hidden battery. Page after page of intricate paper  constructions that unfolded themselves and then folded back down again.

I remembered some of the books that our children used to enjoy when they were little, and how the thrill of pulling a tag to make something move or opening a flap to see what was inside never seemed to pall. But I've always taken pop ups for granted and never really considered exactly how they were produced. I certainly had no idea that they could be such marvels of "paper engineering" - a fascinating term in itself. 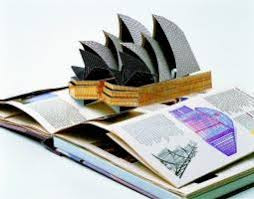 This wasn't in Trevor's collection, but how amazing is that!
Posted by Philippa Werry at 00:42