"Comedy of Errors" was a comedy of errors

Another thing I love about Wellington, as well as the brilliant cafes: brilliant movie theatres. The Penthouse in Brooklyn has a regular programme of plays performed at the National Theatre in London. The plays are filmed and broadcast live to audiences in cinemas all over the country. In NZ, we have to wait a bit longer, but it's still - almost - like being there. You get to watch the audience settling down in their seats, then the the lights dim and as well as seeing all the action on stage, you get fabulous close-up shots of the actors.

The latest play was Shakespeare's The comedy of errors, which I'd never seen performed before. As part of the deal, you also get a few interviews beforehand with the actors or directors. Some people are a bit snooty about this play because it's one of Shakespeare's earliest ones, but as the interviewee said - if you didn't know that King Lear and Othello and all the other plays still  lay ahead, and took this one at face value, it is still a very funny play, but with serious overtones about how we know who we are and what happens when we forget that.

And it was very funny, thanks to a great cast and especially Lenny Henry. I love it when an actor can convey so much by merely rolling their eyes or raising an eyebrow, and how they can make an ordinary action quite hilarious simply by how they perform it . 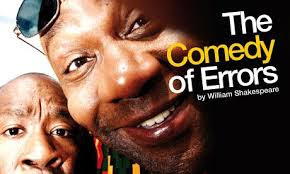 The play starts with a long monologue, which is apparently another reason why it's considered hard to stage, but it was carried off in style with the help of some amazing scenery to re-create the shipwreck (OK so you can't afford that kind of stuff unless you are the NT, but it was amazing.) And the Phoenix 3-storey apartment block, complete with lift and door buzzer, was also great. The one time I wished I really was there in person was during the chase involving a real ambulance and lots of white coated attendants, which was bursting with Keystone-Kops style energy.

And the other comedy of errors? Well, the first 20 mins of the film (mostly ads and interviews) were played in silence while everyone in the cinema first laughed and then grumbled and then hoped that someone else would go and fetch the projectionist. Of course it didn't take long before someone said "this really is a comedy of errors " at which everyone chuckled again, but that's how it is with Shakespeare - all those useful everyday phrases that we take for granted without (usually) thinking where they come from.

Finally someone did go and tell the staff, and the sound came on just as the lights dimmed and the actors came on stage. But then we went right back to the beginning... so we could see the ads again and hear them this time. Never mind. It was all worth it as soon as Lenny Henry turned up.